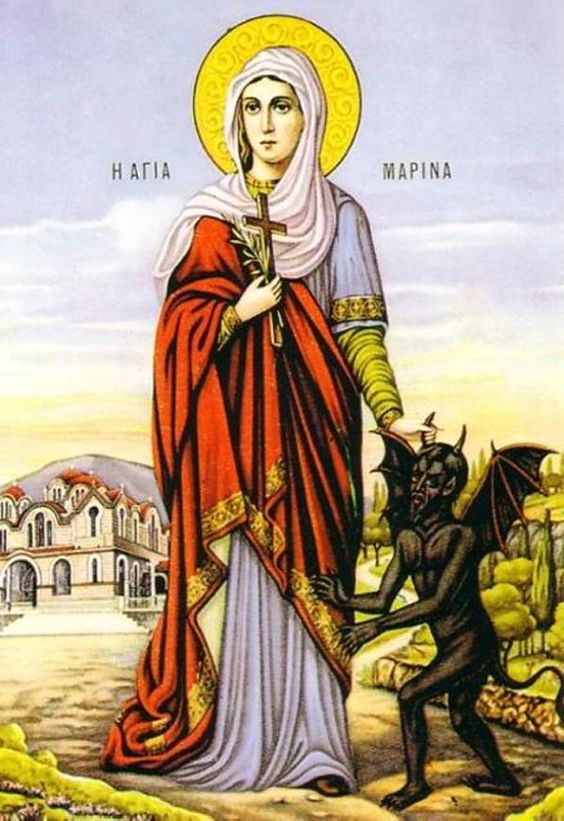 yrdom of the blessed St. Marina, who overcame the Devil. She was one of the daughters of the nobles of Antioch. Her parents were pagan. When her mother died, her father sent her to a nanny to raise her, who was a Christian. She taught Marina the Faith of Christ. When Marina reached the age of fifteen years, her father died.

One day she heard her nurse talking about the biography of the martyrs and what glory they receive in the Kingdom of Heaven. She longed to become a martyr in the Name of the Lord Christ. One day St. Marina went out of her house with her maiden servants, and on her way she passed by Lopharius Ebrotus, the governor, who admired her much when he saw her. He ordered her brought to him. When the soldiers came to her, she told them that she was Christian. In turn, when they told the governor this, he was distressed for he liked her, and he had her brought to him by force. He offered her the worship of the idols and asked her to forsake God, but she refused.

Then he asked her, "What is your name? and from where are you?" She told him, "I am Christian. I believe in the Lord Christ, and my name is Marina." He tried to persuade her by many promises and promised to marry her, but she did not heed him. When she cursed and insulted him, he ordered her body scraped with iron combs, then rubbed with vinegar, salt and lime, which they did. Nevertheless, she endured with patience. They cast her in prison, thinking that she was about to die. Immediately the angel of the Lord came, and healed all her wounds. While she was standing up praying, and her hands were extended in the form of a cross, a huge and terrifying serpent came forth. When she saw it she was frightened and her whole body trembled. The serpent swallowed her up, and her soul almost departed from her. She made the sign of the cross and prayed while she was in the belly of the serpent. It split open and fell on the ground dead.St. Marina went out unharmed.

The next morning, the governor ordered her brought to him. When he saw that she was well, he marvelled much, and told her, "Marina, your sorcery has become evident today, so listen to me. Worship the gods and much good would be for you, and I will give you all that I have promised you." She looked to him and to the dumb idols with contempt and said, "I worship the Lord Jesus Christ, the Son of the Living God, the God of heavens and earth, and whatever you wish to do with me, do, for I will not heed you." The governor ordered her hanged on the wheel, the squeezing wheel, and squeezed very tightly. They did so, then cast her in prison. The angel of the Lord came to her, and healed her. Then the Devil appeared to her and said, "O Marina, if you obey the governor that would be for your good for he is merciless, and he wishes to erase your name from the face of the earth." She realized that he was the Devil. Straightway she caught the hair of his head, and she took an iron rod and started to beat him, saying, "Stop it O Satan." Then she bound him with the sign of the cross, not to depart from before her until he told her all about what he does to the human race. When she pressed him, he told her, "I am the one who makes adultery, stealing, blasphemy, and earthly desires, good and desirable to the human. And if I do not overcome him, I steer sleep and laziness against him, so he will not pray and ask for the forgiveness of his sins." The Saint straightway expelled him.

When the governor saw her he marvelled much, then he ordered to uncover her body, and to fill a large cauldron with melted lead, and to immerse her in it. When they did so, she asked the Lord to make this a baptism for her. The Lord sent his angel in the form of a dove. She immersed while saying, "In the Name of the Father, and the Son, and the Holy Spirit, one God Amen." A voice from heaven called her and said, "O Marina you have been baptized in the baptismal water." She rejoiced exceedingly, and those who were present heard what had happened to the saint. Many of them believed, and the governor ordered to cut off their necks, and afterwards ordered to cut off St. Marina's holy head. The executioner took her and went outside the city, then told her, "My lady Marina, I see the angel of the Lord and with him a crown of bright light." She said, "I ask you to tarry on me until I have prayed." She extended her arms and prayed fervently, then told the executioner, "Do what you have been ordered to do." She bowed her neck to the executioner who told her, "I could not do so." The saint told him, "If you do not do so, you would not have a share in the Kingdom of God." When he heard what she said, he took the sword and cut her neck off then he cut his neck also while he was saying, "I believe in the God of St. Marina." He fell down beside her and he received the crown of martyrdom in the Kingdom of Heaven. The Lord had manifested from her body many signs and healing miracles. Her body is presently located in the church of the Lady the Virgin Mary in Haret El-Roum.

May her prayers and intercession be with us and Glory be to God forever. Amen.