Do you want to be made well? 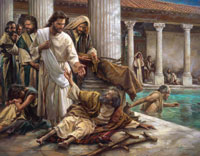 Fifth Sunday of the Great Lent:

There have been many great events throughout the history of the world, many with riveting results. But none can begin to approach the earth-shattering impact made by the life, death, and resurrection of Jesus Christ. Whether one is a devout Christian or a vehement atheist it would be impossible for any honest historian to deny this. No atomic bomb, world war, genocide, or trip to the moon could come close to the significance of St. John’s opening words in his

gospel, “the Word became flesh and dwelt among us” (John 1:14). The gospel follows the life of Christ and his introduction as the Messiah. But the fifth chapter within this gospel marks the beginning of a division.

Up until this point St. John had focused on Christ’s childhood and ministry, but it is in the chapter that one first notices the rejection and hostility from the Jews. And it is also in this chapter that an important healing by Christ makes its appearance. In this chapter we read the story of the paralyzed man at the pool. He had been suffering for thirty-eight years from an infirmity, while holding on to some slim hope that he would one day be healed. He knew that the angel of the Lord, would stir the waters of the pool of Bethesda once a year, and whoever stepped into the water first would be healed of whatever ailment they had. And so the lame man joined many other sick at the pool, watching and waiting for the moving of the water. He had been there for many years, but he had no one to move him into the water. Those who had their mobility, or friends to place them into the pool, always reached the water before he did. But he kept waiting for another opportunity, hoping that the next time someone would care enough to help him in.

Ironically the pool of Bethesda is translated to the “pool of mercy”, but it is anything but. Instead, it is a place filled with sickness and misery. When Christ passes by the pool, this man’s entire focus is on himself and the pool. When Christ asks him a question, “Do you want to be made well?” (John 5:6), he does not answer the question but rather complains about how no one will help him get into the pool, “Sir, I have no man to put me into the pool when the water is stirred up; but while I am coming, another steps down before me” (John 5:7). Even though he had the Healer and Savior directly beside him, instead of asking for His healing, he instead tries to solicit Jesus to lower him into the pool. He mistakes Christ for a helper to get him into the pool, rather than the harborer of the solution. Oftentimes we find ourselves in this same condition, constantly waiting for something. Waiting for some great miracle or emotion to plague us to ensure to us that God is with us; waiting for: a college acceptance; marriage; children; or some business opportunity so we can achieve monetary success…just waiting. Too often we don’t find ourselves making progress in our lives because we’re constantly waiting. Even from a secular perspective John Lennon is famously quoted as saying, “Life is what happens to you, while you’re busy making other plans”. We’re constantly waiting for that next big moment, and not noticing that life is passing us by.

The “pool” represents the thing on which we are fixated. Just like the lame man, we too are focused on trying to get Christ to fulfill our plans. Christ is often ready to visit us, but we are too busy focusing on the object or opportunity of false hope (in this case the pool), that we don’t see Him. Christ wants to enter into the situation of our misery and heal us, but we never look to Him. We don’t ask for God’s will, we ask for Him to help us to achieve this specific goal or plan that we have set up for ourselves. But Christ is not going to follow our plans, we must follow His. Christ simply does not heal him, He tells him “Rise, take up your bed and walk” and immediately the man was made well, took up his bed, and walked” (John 5:8-9). Christ does not hand us the answers, He makes us exert effort in order to be healed/helped. He asks the man to rise up and walk, and as the lame man goes to follow this commandment he is IMMEDIATELY healed. He waits for 38 years, fixated on the wrong source of healing, and the second he turns to Christ he is immediately healed. And so the question becomes what are you waiting for? Or who are you waiting for? Waiting is evidently not the answer: the lame man was waiting for 38 years.

It is clear from the start that unlike the many other people whom Jesus had healed, this man was not healed due to his faith. To start off with the man was not looking for Christ, but rather Christ found him. Christ says nothing to him about his faith having made him well, as He had often done with the others. After he was healed, the lame man still had no idea who Christ was. When the Jewish leaders approached him asking why he was carrying his mat and who had healed him on the Sabbath it says, “But the one who was healed did not know who it was, for Jesus had withdrawn” (John 5:12).When Christ approaches him later, the first thing he warns him, “Sin no more lest a worse thing come upon you” (John 5:14), and this is when the lame man finally realizes who this Man is. This shows that often, Christ is reaching out to us, whether we are looking for His guidance or not. He performs miracles within our lives daily, and we, just like the paralyzed man, find ourselves “not knowing” who He is. And Christ comes to us and says, “Sin no more lest a worse thing come upon you”, seeking to make us recognize Him. One may sit and wonder, what could possibly be worse than 38 years of paralysis? And the answer to that would be eternal hell and separation from God. We learn from this that sin leads to God’s judgment. If the lame man does not repent and stop sinning, he will find himself in a worse position. God is loving, but He is also just. He will punish us for our evil deeds and our lack of repentance. Most of us don’t want to hear that. We want to hear “Rise up and walk”, but we’d like to skip out on the “Sin no more” piece.

It is shocking that the Jews, who had formerly seen the paralytic unable to walk, did not question how this man was suddenly walking, but rather their concern lay in why he was breaking the law on the Sabbath. The miracle was right in front of them and they couldn’t see it. They were blinded to it, by merely focusing on what they thought was important to God; the law being broken. We oftentimes find ourselves so caught up in rules and formality that we sometimes forget that the main goal of Christianity is love, edification of others, and doing good to those we encounter whenever possible. You will always be able to find someone to talk you out of doing something good…don’t listen to them. Cynics will keep you imprisoned, and they will take away your hope. But there is always hope. After 38 years, what hope did this man really have in being healed? I’m sure in some part of his mind he was resigned to his fate. He had to have thought “This only happens to other people”, “I have no one to put me into the pool, I’ll never be healed”, “I don’t deserve the healing”, etc. He would have never known or believed that that specific day would be the one where his life would be forever changed. And so this story serves as a reminder to us that no situation is too far beyond the reach of God.

As we read this story, it’s as if Christ is asking us individually if we would like to be made whole today. And each of us will stand in our own way with our excuses and our cynics. St. Augustine puts it perfectly; “The life to which we are accustomed holds us more than the life we long for”. Routine comforts us and change scares us. The life which we have, no matter how bad it is, is at least known to us, and that is why when Christ asks us, “Do you want to be made well?” we don’t jump at the opportunity, instead we give excuses. We have to trust in His wisdom and His healing. As St. John Chrysostom says, “For if the gold refiner sees how long he ought to leave the piece of gold in the furnace, and when he ought to draw it out, and does not allow it to remain in the fire until it is destroyed and burnt up: much more does God understand this, and when He sees that we have become more pure, He releases us from our trials so that we may not be overthrown and cast down by the multiplication of our evils. Let us then not be repining, or faint-hearted, when some unexpected thing befalls us; but let us suffer Him who knows these things accurately”. Who knows what will happen if we give Christ control of our lives today. The paralyzed man would have never known if he could walk again if he hadn’t trusted and taken the first step, and we’ll never know what Christ can do for us if we never take that first step. Just learn to look next to you at Christ, instead of fixating your eyes on the pool. Whatever it is you’re waiting for, Christ can give you. So He is asking you today, “Do you want to be made well?”…What will your answer be?

We have 1141 guests and no members online